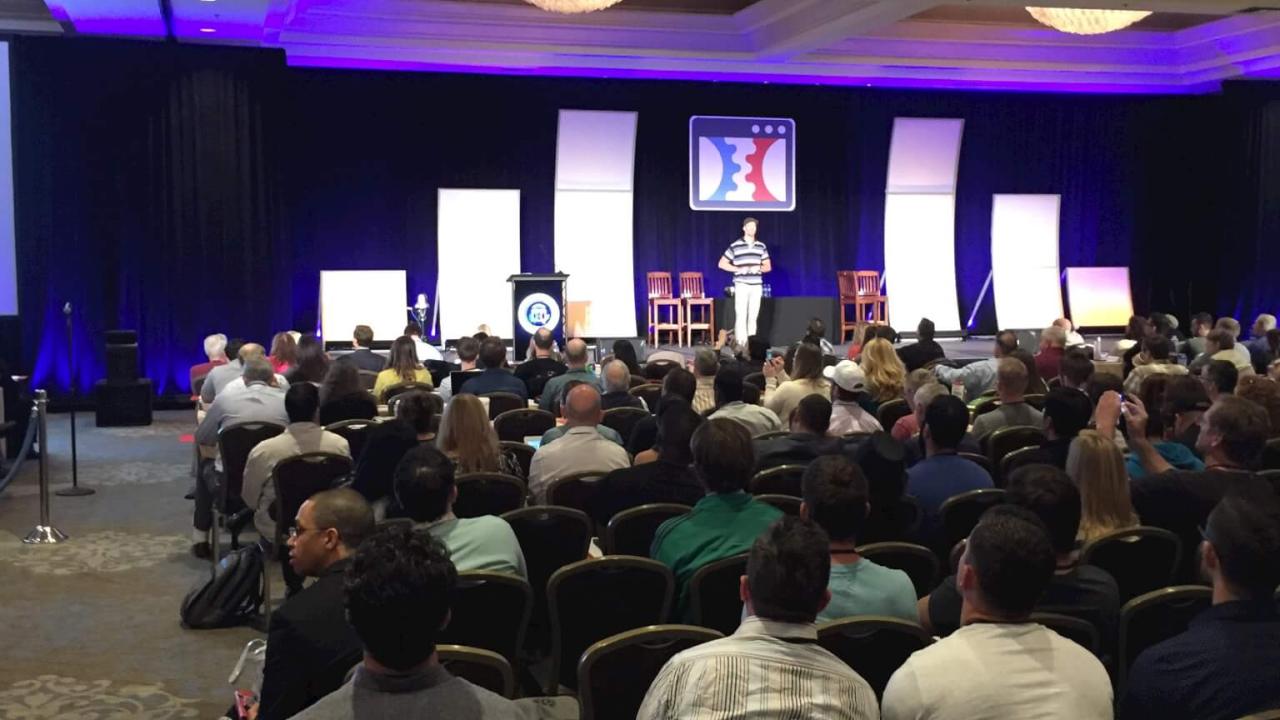 As a lot of you know I've been spending a lot of my personal time focusing on building ecommerce and lead generation offer/products. You can follow all that at ProductSquad.com. And in doing so I've played with most of the platform out there Lead Pages, Unbounce, Click Funnels, Shopify and others. And out of all of them I've fallen in love with Click Funnels. I think for ease of use, testing a prototyping new offers and lead flows it's amazing.

The team and I are using the Click Funnels platform 5-8 hours a day to build and test new stuff all the time. While doing that I found out that they were having an event right here in San Diego.  So I bought myself and 3 staff members tickets to the event.I think tickets were around $500 each if you bought them 2 at a time. $699 if you only bought a single ticket. There was 4 of us in total so the bill was $2,000 for all of us to attend. For me investing in our company and our team is always a no brainer. One good idea or connection can really make a HUGE difference in our business and our bottom-line.Keep in mind I've invested in a lot of stuff that has sucked as well. You just have to try it all...

What we were looking for from the event

Most of the team I took are very experienced marketers that have been to many seminars and built tons of marketing funnels our whole intent in going was to learn new tips, tricks and strategies to improve our funnels we're building.Who it was for

Overall I felt the content was really dumbed down for newer people and not overly relevant. This image pretty much sums up most of the content.[caption id="" align="aligncenter" width="480"]

Waterboy - You Can Do It![/caption]

The funny thing to me was the part I enjoyed was Russell talking about his funnel break downs with data. Then at one point he said almost jokingly.

This is just the same content I already have given you in my books and videos online. But you still pay to come see me live.

What I went home and bought.

I think most of his audience was info marketers that were just trying to make their first $1. For newbs and info marketers sure that’s great, just tell them to come up with an idea and resell the same stuff over and over. Lowers that barrier of fear that I have to create all this stuff.

Unfortunately that’s not what we paid for or was looking for. We wanted hard hitting info on how to become tactically better in the field.

So what did I do?

I went back home that night and bought all of his books for $4.95 each or whatever they were. Then he hit me with an up sell for a video version afterwards and I knew it was just going to be the same content that was in the book but in video or whatever… so I passed.

I felt the event was trying to be a motivational event like a Tony Robbins event.

Keep in mind I LOVE Tony events and think they’re super beneficial for people to go to. I’ve seen 100’s of speakers and used to be a speaker for Tony myself. And Tony is the best of the best. If I want to go to a motivational event I’ll go to Date with Destiny, Unleash the Power Within or one of Tony’s other events where he personally speaks… which aren’t many outside of those anymore.

If you want the best motivational events to go to Check out:

They're the best of the best and 1000% well worth anyones time. I don't care who you are.

However it was definitely worth the time...

I know I wrote that it wasn’t for us above. But as with most things there was a silver lining.

Just like most shows there was a lot of people “around” that were very smart and experienced… They just weren’t in the actual event. I ended up hanging out at the Ale House inside the hotel for quite a while on day 2 and there I met a ton of smart marketers.

Just like most trade shows I go to, the smart experienced people you want to be talking to aren’t in the event itself.

Shame on me, I should know better. Especially after 12-15 years of trade shows.

Some really smart people doing some really smart things that were not even on my radar. Really excited for a bunch of contacts I made that I can add to my network of people I talk shop with.

The anchor keynote speaker was amazing. If you don’t know him, he built outdoor world and is the host of The Profit TV show, one of my favorites on TV right now. You can click that link and watch all the episodes online for free.

His general message was.. you as the entrepreneur & leader need to take the weight on your shoulders. If someone isn’t doing something right or is not performing like they should, there’s a very strong chance it’s based on something you their leader is doing. The second you start blaming other people is the minute you fail. It’s our jobs as the leaders to hire right, make sure people are trained, make sure they’re heard and make sure their priorities are as important as everything else.

If the staff member or partner is not the right fit it was probably our fault we hired the wrong person to begin with.

One quote he had that resonated with me was….

People come to work for us because they're not capable of leading themselves. - Markus Lemonis

When I started A4D I used to tell people they were entrepreneurs inside the company. This didn't work so well and cause a lot of issues. Because if people were truly capable of being successful entrepreneurs they would be.

Another great thing he said and I say to my employees sometimes is...

Would I buy this product for this price? Would I buy it from myself? - Markus Lemonis

I like to ask my staff this a lot of times when we're working on running traffic and building a campaign. How would you sell this product to yourself? What would make you buy it? I think this is really powerful as a lot of times we detach from what we're promoting. If you detach I'd suggest considering picking a new product to build or promote.

Will I go again?

If the show were in San Diego next year I’d probably go to the hotel and hang out in the lobby and talk with people. Like I said there’s a great crowd.

But they’re moving it to Dallas for some reason. (I imagine cheaper venue) I don’t think that I will fly to Dallas for the next one.

In talking with some people that have been going for a few years they said that last years show was much more tactical. Trey Lewellyn spoke who I’d love to hear talk. He has amazing break downs of his funnel and is the guy that built the g700 offer.

I wouldn’t 100% rule this show out 100%. As with Traffic & Conversion they lost their way for a while. It got super spammy and self help. But then I heard this year the content was much better like it used to be.

Some slides I thought were Interesting